April 30, 2022, 08:27:49 PM
What do you think our odds are? We definitely need October/November/December Jack in there. When they crushed us 8-1 I took notice. This is an elite team. We've got a puncher's chance. I say run the body as much as you can. Guys can get taken out legally with good hits.

Keefe said "the harder the better. It's what we need right now."

We're definitely underdogs. We'll see if that suits us. Hopefully Bunting, Sandin and Kase can get in there at sometime.
#2

What a difference a year makes! What was the ballpark at the start of last year? 6 x $8-million? Have fun Tyson!
#4


Predicting skill, jump and special teams win the day, with team D still being very rusty for most.
Leafs in three.
#5

Different from last year:
- John Tavares.
- Matthews is healthy (revealed a back issue after last series).
- Kadri will (hopefully) ride the physical line without a suspension.
- All young players a year older and wiser.
- Stronger down the middle and arguably stronger on D with the addition of Muzzin.

Different over the regular season:
- Everyone giving 100% every minute of every game with heightened attention to detail.
- Some timely physical play, now an investment with a series on the line. 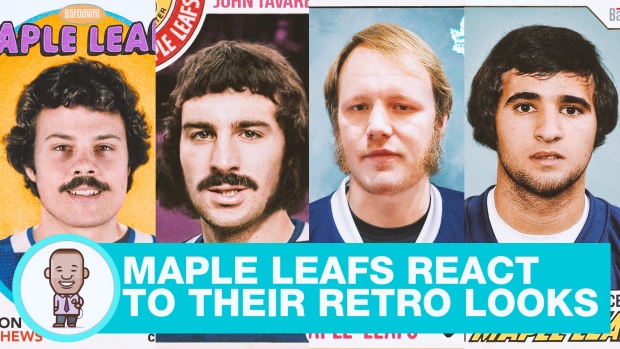 September 30, 2018, 12:29:24 PM
Thinkin' about them Babsocks the other day and I think it's swell of the guy to lend his visage to a fun product like that. He probably doesn't see a cent (not like he needs it) and knowing him all he asked was a percentage to charity. Not many high end professionals would not take themselves too seriously like that.
#17

January 10, 2018, 01:51:54 PM
General Erik Karlsson thread. Not sure where it belongs. I find this one fascinating. After Stamkos I've come around on these guys re-signing with their clubs long term for max dollars. Stammer, Price, I'm predicting Johnny T. This one has me intrigued. Melnyk vocal about being on a budget. Albatross contracts in Bobby Ryan, Phaneuf, etc. If their window has closed could be time for a complete rebuild. I'm guessing he stays, but anything's possible. He can't be happy with the way things have gone there this year, and what about the future...

Basically every team, yours truly included would be SALIVATING at getting this guy. So the question is, what would you send the other way? Stud D puts a lot of teams over the top. It would be hard but would you move picks, prospects, young players, cap space and anyone not named Auston Matthews?

Very sketchy rumours that the ten teams include areas in California, Tampa, even Detroit.
#18

Main Leafs Hockey Talk / Is it Preseason yet...

July 11, 2017, 07:55:56 PM
Just wondering what you guys are doing to get your Leafs fix this summer. To remind myself of this cool group of young guys I've watched again in no particular order:

Babs and Auston taking time from the boats and golf courses to challenge for the Jack Adams and Calder this Wednesday in Las Vegas.

The hire. The mandate. The execution. Shanny appreciation thread.

After Burke, I had no expectations with the hiring of executive Brendan Shanahan by the MLSE. I liked the things coming out of his mouth, but of course, talk is cheap. Is this just another stuffed suit? A politician and glad-hander who has no idea what he's doing? Time would tell...

They started showing signs they that truly were going to build through the draft. There was the aggressive pursuit of Coach Mike Babcock and GM Lou Lamoriello, both of which have said that it was Shanahan's mission statement for the Toronto Maple Leafs that made them want to come here. He hired intelligent people and then stayed out of their way. After two-and-a-half years I'm now comfortable in saying that Brendan Shanahan is an excellent executive.